These American Alligators were spotted by our Conservation Biologist, Peter Smith, on Rose Hill golf course in South Carolina, a property on which a conservation easement was donated to NALT 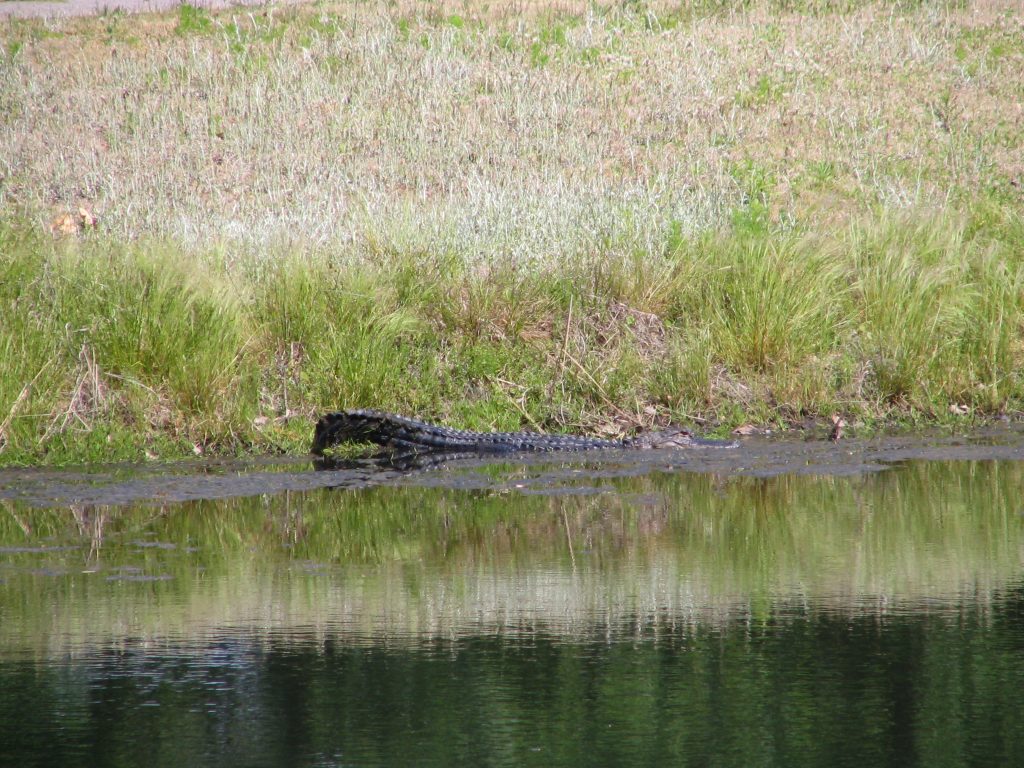 Overview: The American Alligator is considered the largest reptile in North America.  Often confused with crocodile species, it is distinguished by its rounded snout, as well as a dark armored body with a muscular flat tail and four short legs.  The Alligators possess a long snout, and the young can be distinguished from the adults with the bright yellow stripes found on their juvenile tails.  This species is found in a range that stretches from North Carolina to Texas where they inhabit freshwater in slow-moving rivers.  They also live in swamps, marshes, and lakes.  They are not as tolerant of salt water as crocodiles, due to the fact that the salt glands on their tongues do not function.

Importance: The American alligator plays a key part in ensuring a healthy biodiverse ecosystem by its construction of “alligator holes”, which are dug out by the alligator using its snout and tail to hold water and provide refuge during dry periods.  The holes offer a vital source of water for fish, insects, crustaceans, snakes, turtles, and birds.  As a result, the preservation of this species is highly important for the maintenance of healthy and diverse ecosystems.

Threats & Management: This species is often considered a rare success story of an endangered species, and today it is thriving thanks to state and federal protections, habitat preservation efforts, and reduced demand for alligator products such as their hides.  However, they are still endangered in scattered areas of their range, as they continue to be threatened by habitat loss and encounters with humans.  The biggest factor in its endangerment is the destruction of habitat, which includes water management systems and increased levels of mercury and dioxins in the water. In addition, as sea levels rise due to climate change, alligator-inhabited freshwater and brackish marsh may face an increase in saltwater; this in turn can lead to higher water temperatures, which will produce a higher ration of males and alter the male-female ratios. The Fish and Wildlife Service lists the American alligator as threatened, due to the similar appearance it has with endangered species, such as crocodiles and caimans.