Overview: Considered the national emblem of the United States, the bald eagle has flourished under protection.  Larger than most other raptors, it possesses a heavy body, large head, and long, hooked bill.  Known for its white head that is not actually bald, adult bald eagles also have tails with dark brown bodies and wings. They are incredibly large with wing spans reaching up to 8 feet.  They soar high in the sky and are solitary, often traveling far distances across North America. 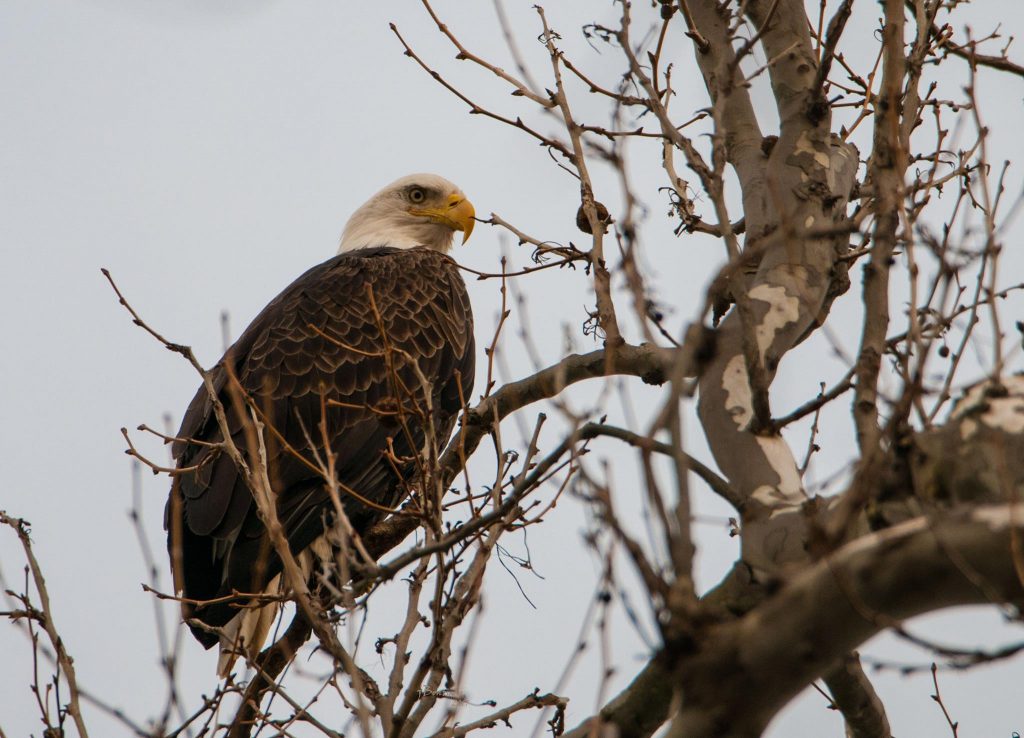 Habitat: Bald Eagles prefer to live near lakes, reservoirs, rivers, marshes, and coasts.  They can also be spotted near fish processing plants and dumpsters during feeding.  Fish, birds, reptiles, amphibians, invertebrates, and small mammals make up their diet.  This species of bird will build incredible large nests (typically 5-6 feet in diameter) in trees, cliff faces, or ground sites.  They prefer sturdy conifers that protrude above forest canopy.  In southern parts of their range, they can be spotted nesting in deciduous trees, mangroves, and cactus.

Threats & Management: The bald eagle’s recovery has been very successful and its numbers have increased between 1966 and 2014.  The species became rare during the 1900s when it was popular to trap and shoot them for sport and protection of fishing grounds, and many suffered from pesticide-caused reproductive failures.  They were protected in 1978 and since then their recovery has been noteworthy.  However, they are still threatened today by lead poisoning from ammunition in their prey, dangerous oil spills, collisions with motor vehicles, and development that is encroaching upon their nesting, perching, roosting, and foraging habitat.  Therefore, their nesting habitat along coastlines must be actively protected and conserved.

Can you spot the Bald Eagle found in a tree on Knights Island, MD?  NALT Conservation Biologist Matt Stutzman found this guy while on a monitoring trip!