Limited Development, News You Can Use, Science, Stories From the Land · November 20, 2018

Conserving Land with a Focus on Bats

Farmers of the tropics, tequila-makers and pollinators are just some of the names we’ve given to bats. As we learn more about these fascinating creatures, we’ve found that their value in natural ecosystems and their effects on human economies only increase. In the U.S. alone, bats save farmers an estimated $23 billion annually in pesticides and crop damage, thanks to their love for insects and agricultural pests. In the tropics, fruit-eating bats have been recognized as fellow farmers, because they eat and disperse fruit seeds that are essential to restoring damaged rain forests. Meanwhile, in Mexico, the agave plant relies on bats to pollinate its flowers and reproduce before humans turn this sweet plant into tequila. Overall, bats pollinate more than 500 species of plants, thus supporting fruit production in local economies and diverse animal populations.

With 1,300 species flying on every continent except for Antarctica, bats play pivotal roles in ancient and modern cultural lore around the world. However, it wasn’t until the 2006 outbreak of the white-nose syndrome in North America that scientists and others began digging deeper into the role that bats play in our ecosystem. This rapidly-spreading and fatal disease caused by the fungus Pseudogymnoascus destructans, results in bats rousing from hibernation too frequently and using up their winter fat reserves. The devastating effects of this disease, combined with past improper cave regulations and the hundreds of thousands of bat fatalities caused by wind turbines, means that bat protection is imperative now more than ever.

At North American Land Trust (NALT), we are certainly hearing their calls for protection—or rather, we are sensing their biological sonar emitted through echolocation. Working with partners at Virginia Tech who have the expertise to decode the recorded calls of bats, we’ve been able to identify which species are present on NALT Conservation Areas. The process begins with NALT Biologists setting up acoustic bat recorders for roughly two weeks on a Conservation Area, before transmitting the recordings to Virginia Tech to be screened with software designed to identify the feeding calls of bats from other night sounds. Senior Research Analyst Michael St. Germain and his team then analyze the possible species, taking into account location, habitat and time of year to ultimately determine which species of bats are present.

Conservation Biologist Matthew Stutzman explains, “NALT is always looking for ways to improve the documentation of lesser known rare, threatened and endangered species utilizing habitat within the Conservation Areas, and this of course includes bats.  Using wildlife cameras, acoustical bat recorders and burrow cameras, as opposed to just looking for evidence with our own eyes during the day, like observing tracks and scat, we can now have a more thorough investigation of what species are utilizing these habitats.”  Once NALT is able to identify individual bats species on a conservation project, we can tailor our conservation efforts to protect foraging, roosting and pupping habitats for numerous bat species.  By expanding our knowledge about bat species and their distribution, we can recognize local conservation needs while designing conservation measures specific to these bats’ biology, habitat requirements and ecological needs.

So far, we have found that the federally endangered Indiana bat (Myotis sodalis) exists on one NALT Conservation Area, while the federally endangered gray bat (Myotis grisescens) and the tri-colored bat (Perimyotis subflavus), which is petitioned to be federally listed, have been found on multiple NALT conservation sites. Additionally, the silver-haired bat (Lasionycteris noctivagans), big brown bat (Eptesicus fuscus), southeastern myotis (Myotis austroriparius) and little brown myotis (Myotis lucifugus)—all of which have been affected by white nose syndrome or an associated fungus—have also been discovered, and we often observe that up to ten different bat species can be found in one location. These results are encouraging as we draft our conservation easements to permanently protect their habitat.

Meanwhile, at the NALT Conservation Area at Victoria National Golf Club in Indiana, proactive land managers saw bat houses as a natural opportunity to avoid the use of toxic pesticides on the greens. Golfers will be less distracted by pesky bugs when you consider the fact that some species of pregnant or nursing bats can consume their body weight in insects every night—more than 1,000 per hour! And with their nocturnal schedules, bats near the greens won’t have to worry about dodging golf balls. Not to mention, bat droppings—called guano—collected under the bat houses make for a fantastic natural fertilizer. 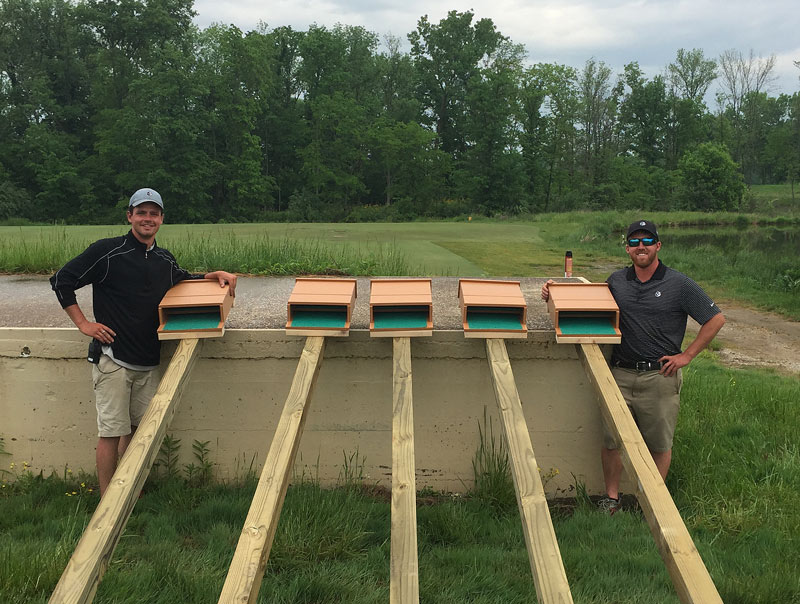 In 2016, land managers at Victoria constructed and installed five triple-chamber bat houses so that bats may find shelter, hibernate and stay safe during pregnancy, which is more important now than ever due to bat habitat loss in recent years. However, bats can be incredibly sensitive when it comes to selecting ideal roosting conditions, meaning the land managers needed to take a structure’s location—like being near water and foraging areas—and design into consideration. As a result, it can take up to two years for bats to settle down in one of these new structures, so Victoria hasn’t seen much activity since installation; however, land managers remain hopeful that they’ll have some dwellers in the near future.

Whether you are a scientist researching white nose syndrome, a conservationist working to save bat habitat from destruction, a land manager trying to save costs or a landowner hoping to have an abundant garden this summer, helping bats is not only beneficial to you personally, but their preservation is necessary for our global survival. As NALT strives to protect important habitat for bat roosting, pupping and foraging, we invite you to join us in our conservation efforts.

If you’d like to build a bat house for your backyard, then check out this bat house that has been approved by the U.S. Fish and Wildlife Service and was developed by one of our consulting ecologists, Copperhead Environmental Consulting. You too can make a difference in bat conservation!